Camerado, I give you my hand! I give you my love more precious than money,
I give you myself before preaching or law: Will you give me yourself? will you come travel with me?
Shall we stick by each other as long as we live?

– Walt Whitman, from “Song of the Open Road”

Thus began Michael Bastian‘s wonderfully curated show, the sound of crickets swirling in the air. As the makeshift streetlamps faded and the show lights rose, a collection so attuned to the spirit of the outdoors and the magnetism of the open-road passed down the slot car track carpeting, before the eyes of many of menswear’s cognoscenti, and filled me with a sense of yearning. For a transitory moment, the adventurer in me misheard Whitman’s Camerado as my beloved Colorado.

“Skinny Love” serenaded onlookers as we sipped white wine in anticipation. Bastian, showing at Charles Nolan’s beautiful space, buzzed about the room in the minutes leading up to the show, his, now signature, red and blue striped rugby shirt well-layered over a pale blue oxford cloth buttondown.

As lights dimmed and the show began, I was distracted by all the faces lit by Blackberry devices and iPhones. It goes with the territory, I suppose.

Individually, the jackets stood out. The hooded, patch pocket field jacket, the tweed topcoat, and Bastian’s take on the fishtail parka stood out as favorites. 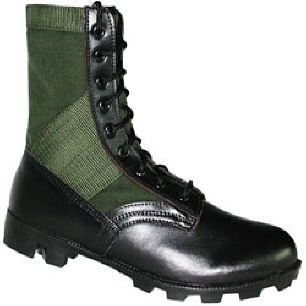 Nearly every model wore OD green jungle boots, and had his trousers tucked and bloused just so. 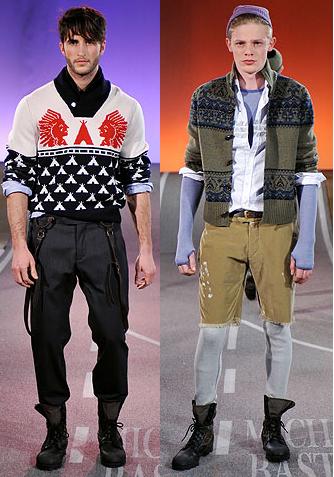 The sweaters shone, in particular the cowichan-style shawl neck pullover and the Scandinavian-inspired cardigan, as well as a crewneck shetland with a raccoon motif which peeked out from inside a pinstripe suit. 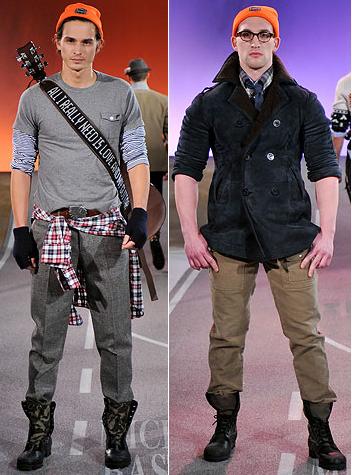 I’m not ready to say “I told you so,” but blaze orange watch caps did make an appearance.

My favorite looks included the aforementioned pinstripe/raccoon combination with a red kerchief and a rubber boot reminiscent of the Maine Hunting Shoe; the camo chapeau, merlot bow, brass-clasped plaid mack, well-worn jeans, and Weejuns – all of which seemed to be inspired by this guy; the plaid tux jacket (single button, peak lapel) and purple pinwale cords; and the image at top, which was my favorite overall. Mr. Bastian’s elegant take on the rugby jersey with a handsome red sailor stripe, corded camp pants, and camouflage hunting jacket with its stately dark brown suede shoulder patch are instant classics and should be regarded as such henceforth.

That’s it for now from New York’s Fashion Week. I’m all plaidout.

All images, unless noted,  c/o CN.